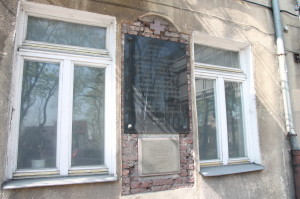 It was placed on 27th May, 1996, on the wall of the building at Kilinskiego Street. As reported by one of them in this building, in the years 1944 – 1951, the District Public Security Office has its headquater here.

It was a place of detention, torture and death of many soldiers of the Polish Underground National Army, the Freedom and Independence, the National Armed Forces and civilians. The symbol of the fate is the other plaque with the model of the protocol for execution on 27th February, 1946, at 2.25 of the death sentence on Jerzy Kedziora from Justynow.