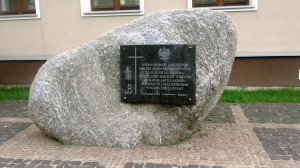 Originally the plaque was placed on the wall of the former railway station at Kolejowa Street in 1994. Again it was placed on a large boulder and was unveiled in front of the same building, which is now the headquater of the Public Library, on 26th November, 2011.

The inscription on the board announces that 2,500 people deported from Sokolow railway station into the Soviet Union to slave labour in Borovichi and Stalinogorsk camps during three deportations in 1944.