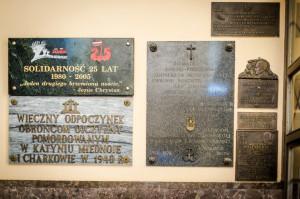 The plaques were placed in the porch of the church. They are devoted to Henryk Oleksiak, “Wichura”, Mieczyslaw Maleszewski, “Zbrucz”, Hanna (Annie) Zaleska from Bachorza and children of Sokolow Land, murdered by the Nazis at Treblinka, as well as soldiers of the National Army of District of “Sep – Proso” from Sokolow Podlaski.

They are complemented by the plaque resembling those killed in Katyn, Kharkov and buried in Miednoje.