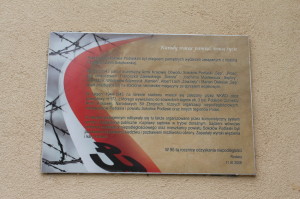 The plaque was placed on the wall of the Sports and Recreation Centre at Lipowa Street in November 2008. It refers to a number of important events, the arena of which was the present stadium.

In July 1943, the diversionary patrol of the NA burned contained therein German warehouses with the military equipment. After the invasion of Soviet troops in the years 1944 – 1945, there was the transmission camp of the NKVD No. 173, from which 300 people were transported by the aforementioned railway station to Soviet labour camps. In the postwar period, organised by the communist government public court hearing an ad hoc basis were held here.