The graves the January Uprising participants at Szopen Street 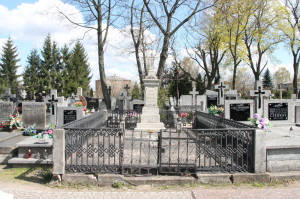 The January insurgents rest in it: Jan Waszkiewicz, Julian Przywoski, Anthony Piecko, and Szymon Rudnicki (along with Michal, a member of the Polish Military Organization and Franciszek, who died on 7th September, 1939, in Rozan).

It is worth to mention about the tomb of the Wronska, Scislowska and Kurkowska families. Sokolow chemist Julian Wronski lies in it, who cooperated with Fr. Brzoska, who, according to some sources, had wanted to arrange the escape of Fr. to Krakow just before he was arrested.  It is worth noting that Julian Wronski’s sister, Zofia Scislowska, was the author of the first description of Sokolow made in 1859, issued in “Niedzielna Czytenia” newspaper.