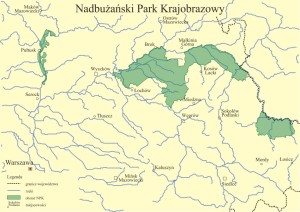 Area of the Bug Lanscape Park is characterised by a ruggedness and a low degree of transformation by humans. In addition, the Bug River is one of the few rivers in Europe, which retained its irregular stream. The location of the area offers the possibility of practise active turistic forms.

In and near the area of the Bug Landscape Park has been appointed 14 reserve, 7 of them lie in the Sokolow county.

More information about the Bug Landscape Park can be found on the websites: http://www.parkiotwock.pl/index.php/nadbuzanski-park-krajobrazowy and http://www.nlot.pl/pl/.