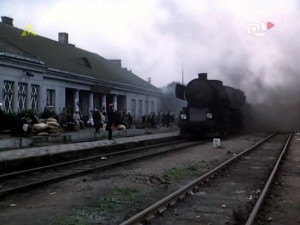 The railway station was constructed approximately 1890, shortly after siedlecko-malkinska railway line, representing a section of Warszawa-Terespol iron road, was run. It is known that this line was started in 1887, and it had – in addition end stations – two middle stations (Sokołow and Telaki) and three stops (Podniesno, Kostki, Treblinka). Most of the facilities in the stations were masonry, except for linemen houses and facilities for switchmen.

During the last war, the railway station facility was destroyed. Together with the pressure tower it was blown up by Germans withdrawing from the city in 1944. Shortly after the war it was rebuilt in a different form – in manor style. In 2006 on the basis of a notarial deed the city took plot with facility of the former Polish State Railways railway station from the Polish State Railways SA. In 2009 – 2011 general renovation of the facility was carried out in order to adjust it for cultural needs of the city. Currently there is Konstanty Ildefons Galczynski City Public Library. This institution has its divisions, among which it is worth noting the Laboratory of Documentation of the City History, dedicated to gathering and sharing of historical knowledge. 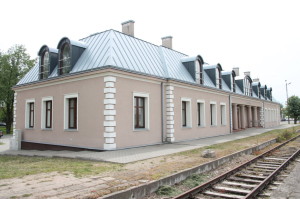 The library is well-deserved for community cultural institution. Reading traditions in the city had its beginning in the first years of the inter-war period. Thanks to the Library of Polish Teachers’ Union, books reached to inhabitants of the city and surrounding landowners. Migratory libraries supported population of communities. Outbreak of World war II interrupted libraries operation, and most tables were destroyed. On 1st April 1946 the County Public Library located in the facility of the Fire Service at Lipowa Street, started its operation. In 1979 Sedlce voivode provided the City Public Library in Sokolow Podlaski name after poet Konstanty Ildefons Galczynski. Over the years, library book collection has grew, and apart from collecting and providing books, it is very actively involved in cultural life of the city and the surrounding area. The library organizes meetings with authors, holds knowledge competitions, book exhibitions, scientific sessions on historical anniversaries, competitions, reading and recitation contests, and many other cultural and educational events.