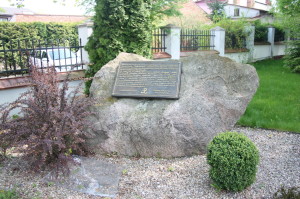 It is placed at Wolnosci  Street, in the current Alior Bank area. It was unveiled on 3rd October, 2010. During the German occupation there was the German Labour Office – the Arbeitsamt, organising captures and deportations of the Polish population to forced labour in Germany.

In the evening of 12th May 1943, Kedyw squad of the National Army of “Sep – Proso” District of Sokolow Podlaski, under the command of Henry Oleksiak, nickname “Wichura” took office and burnt its documentation.