Home City Memorials The Places of National Remembrance in the Primary School No. 4

The Places of National Remembrance in the Primary School No. 4 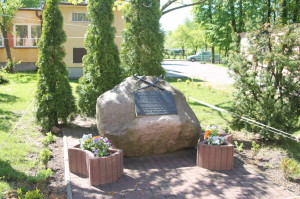 Since 22nd May 1993 the Primary School No. 4 has been held the honourable name of Fr. General Stanislaw Brzoska, continuing the tradition of the January Uprising. In its area, at Kupientynska Street, there are two boulders with occasional plaques.

The first one, unveiled on 17th May 2003, on the 10th anniversary of the naming, contains the already quoted words by the patron at the time of his death. The boulder has a sword and a cross, the symbols of insurgent fate of the chaplain. Not far from it, there is the other boulder, unveiled on 23rd May, 2009, referring to the 1st anniversary of granting the Order of the White Eagle to Fr. Brzoska.