The monument in honour of Stanislaw Brzoska and Franciszek Wilczynski

General Fr. Stanislaw Brzoska (1834-1865), is one of the most famous heroes of the January Uprising. He acted in the vicinity of Sokolow Podlaski, where he struggled against the enemy for very long time. Captured with his aide-de-campe Franciszek Wilczynski, Stalislaw Brzoska was imprisoned and sentenced to death.  Both were killed on Sokolow square.

Perhaps the idea of a monument in Sokolow belonged to Henryk Wiercinski – the activist, journalist, judge, participant of battles of 1863 known in Lublin region. Bishop Henryk Przezdziecki, the ordinary in Podlasie, was also interested in this idea. The bishop initiated the first amount for that purpose, while the pastoral visit in Sokolow in 1919. Among the propagators there were two people of close relationship with priest:  Stanislaw Brzoska from Warsaw, priest’s nephew, the clerk at the Ministry of Agriculture and Ludwik Enckajt (Enchajt) from Leczna, the cousin of Fr.  Stanislaw and companion in fights of 1863. The idea was spread in the press and other printed documents.  The specified action was taken only in 1922, when the Older Scouts Society appealed to city authorities of Sokolow to place the monument in the so-called Large Square as the place of losing Fr. Brzoska. The City Council accepted the idea and Committee of Monument Construction was established soon.  The committee members were: Fr. Antoni Swiecicki, from the scouts – Waclaw Leszczynski (junior), the local councillors – Stanislaw Milobedzki, Kacper Olucha, mayor Bernard Dabrowski (later replaced by Franciszek Raciborski) and Jozef Budzynski.  Since 19th May 1922, the committee was expanded by dean priest Stanislaw Retke, deputy Julian Szymborski, Jan Pedich, Wladyslaw Szczygielski and Lodwik Malinowski. Pedlich was the chairman, honorary chairman – bishop  Przezdziecki. The Committee acted actively in promoting the idea of construction and collecting funds for this purpose.  In 1923 the first works could be commenced.

The design and the model of the monument were made by artist sculptor Aleksander Veith living in Warsaw.  The huge boulders were bought from farmers of villages: Jablonna and Toczyskim, and the processing were started. The memorial made by stone company of Jozef Plosnki from Siedlce, stood on the city square on the 1st October 1924. The following inscription was placed between bronze ornaments:  For insurgents of 1863: Fr. Brzoska, killed in this place on 23rd May 1865 by of the Russians and killed in Podlasie.  Compatriots in 1924. The ceremony of monument unveiling was held on 23rd May 1925. The holy mass was celebrated by bishop Przezdziecki. The ceremony was attended by 12 participants, among them the comrades of Brzoska. By the decision of the government, they all received degrees of lieutenant. 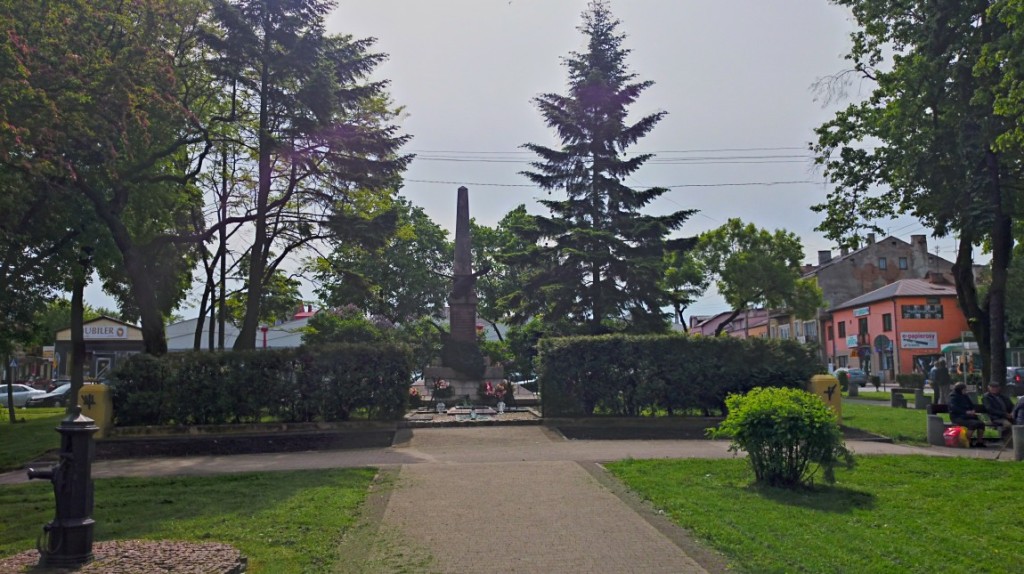 During World War II, during the first months of 1940, Germans grabbed the most valuable items of Brzoska’s monument: the eagle and the wreath.   They then exported from Sokolow and melted for ammunition and weapons. In the years 1953 – 1954 bronze plate was funded and placed at monument foot; the content corresponded to the 90th anniversary of the January Uprising and the 10th anniversary of Polish People’s Army. After 30 years it was the initiative to restore the monument with its former glory. Stanislaw Brzoska Monument Restoration Committee was established,   in the works of which many people involved.  The chairman was Roman Przesmycki, the vice-chairmen:   Witold Gradzki and Wieslaw Pec. During the celebrations of Sokolow Days on 23th-28th May 1983, Sokolow during the period of the January Uprising session was held, during which organisers called for funds for the renovation. Already in the autumn of the year, the plaster cast of eagle sculpture was prepared, made by artist sculptor Ryszard Kozlowski from Warsaw. The cast was made by Decorative Bronze Cooperative of Arts Industry in Warsaw. In mid-May 1984 eagle was attached to the monument, solemn ceremony took place on 23rd May.   The laurel wreath and commemorative plate were added in the next year, when two anniversaries coincided:  – the 120th of death of Brzoska and – the 60th of the monument unveiling. In 1993 Primary School No. 4 in Sokolow Podlaski was named after father Gen.  Stanislaw Brzoska.