The Grand Lithuanian Highway was one of the most important trade and postal routes of the Polish-Lithuanian Commonwealth in the seventeenth and the eighteenth centuries It run through Sulejowek, Okuniew, Stanisławow, Dobre, Liw, Wegrow, Sokolow Podlaski, Drohiczyn, Perlejewo, Ciechanowiec, Rudka, Bransk, Bielsk Podlaski, Bialystok, Czarna Białostocka, Sokolka, Kuznica, Grodno, Druskienniki, Merecz, Orany and Troki to Wilno.

Before centuries the route was travelled by coaches, carriages, stagecoaches; people stopped at the postal stations, spaced every few miles, where they could stay overnight and replace horses. 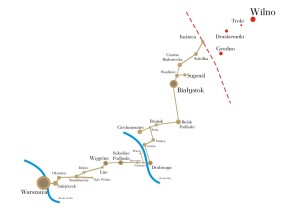 Nowadays the Grand Lithuanian Highway is the trail leading in the footsteps of the old road. The journey begins in Warsaw at Krakow Suburbs Street, where the Saxon Post Office station was. In Warsaw, the trail leads tourists to the Eastern Mazowsze and Podlasie Viovodeships, to the charming towns and noble backwaters, the village inhabited for centuries by people of different faiths and nationalities, where the churches are adjacent to the orthodox churches, synagogues and mosques. The variety of historical sites, cultural landscapes and nature makes the trip on the trail becomes a real and unforgettable adventure.