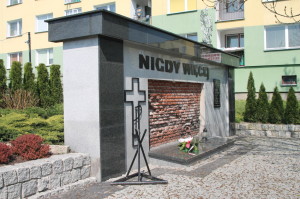 The place of the next execution, made three weeks after the first one, on 17th November 1943, was located at Wolnosci  Street, near the current Syndykat residence district.

It has a special historical meaning, because it is a part of the original wall of the building, under which the following were shot: Wiktor Szajkowski, Eugeniusz Pienkowski, Franciszek Kazimierczuk, Wladyslaw Witkowski, Stanislaw Krysiak, Stanisław Turos, Stanislaw Puchalski, Wladyslaw Fronczyk, Zygmunt Mazurczak, and Kazimierz Markiewicz. Before the war, one of the shot, Wiktor Szajkowski was the head of the school in Rozbity Kamien, and one of the first conspirators in the county.