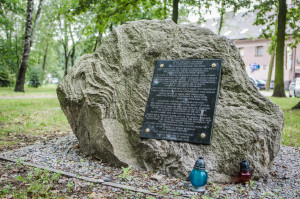 The boulder was erected in 2009, due to the efforts of the Mayor of the city and the Jewish Community of Warsaw, in the Red Cross Square, between Bulwar, Magistracka and Wiatraki Streets.  Before World War II there was a Jewish cemetery, founded in the seventeenth century.

During the German occupation, the cemetery was closed, and the city park was established on this area.  In 1941 the Jewish community was crowded in the area of ​​the ghetto, which consisted of two parts separated by Dluga Street. There were from 6 to 7 thousand people, including Jews deported from other parts of Poland.  According to the current studies, on 10th October, 1942, the Germans liquidated the ghetto. At least several hundred people were killed; others were transported to the extermination camp in Treblinka, where they were killed in the gas chambers. Recent findings indicate that these events took place on 22nd September 1942.