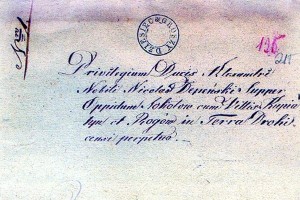 Sokołow Podlaski is the oldest city in the historic Podlasie. Grand Duke Witold called himself Aleksander, as privilege written in Latin in Grodno on 20th April 1424, expressed:

taking into account and in assessing accurate and continuous service, very attentive to us, Mikolaj Sapienski, our secretary, we grant him and his right descendants, our city with villages:  Kupientyn and Rogow form Drohicka land with all belongings and land in perpetuity. We release residents of the city and its villages from any labours, construction and repair our castles, from contributions, fees, taxes, except from 2 grosses, which pheasants of the mentioned villages from crops, granted them after free years, are to pay us for St. Marcin. Due to such gift, Sapienski his descendants, shall be obliged to appear on each war expedition. Burghers and pheasants of Polish or German lineage, shall be transferred by us from Polish or Russian law to German law called Sredzki; we shall preserve the Russians with their rights.

Sokolow owner was Mikolaj Sepienski (formerly incorrectly read as Depiensk) from Sepno. Mikolaj Sepienski, Nowina heb, originated from Wielkopolska middle-class nobility, who lived in Koscianski County, whose ancestral domain was Sepno at the Obra River. In historical sources he appeared for the first time in 1404 as witness in documents of Wielkopolska general starost Tomek from Pakosc. Later, he witnessed from this site several times. In 1408, he was among six members of Koscianski court. Mikolaj – outstanding figure – was trusted advisor, secretary and diplomat of Witold. Mikolaj took part in preparations for Horodlo Union concluded between Poland and Lithuania on 2th October 1413. He was messenger to Teutonic Knights, Rome, German electors, and took part in Witold’s and Jagiello’s messenger on Council in Constance, had numerous negotiations and agreements on behalf of Witold. In 1419, at his order Mikolaj travelled to Moscow, in the same year, he also participated with Polish deputies in the expedition to Zygmunt of Luxembourg.  In addition, he tried to gain a crown to his superior. Mikolaj Sapienski died approximately in 1432.

Mikolaj Sepieński received Sokołow approximately in 1415, because on 12th May that year, he funded Catholic Church and the Sokolow was named city for the first time: oppidum. As stated above the city was located based on Sredzki law, which was rarely used variety of Podlasie law (Magdeburskie law or Chelminskie law were usually applied).  Choice of Sredzkie law for Sokolow was most probably from experience and knowledge of it, spending by Mikolaj Sepienski’s family, where this variety of German law was used widely. Mikolaj Sapienski gained knowledge about different types of German law and forms of documents in caring out his duties as Lukow starost.  It’s also possible that the type of law was decided by consultation of the owner of the city with mayor and the newly-arrived settlers, wishing to regulate internal life of the city by well-known legislation.

The first known mayor of Sokolow was Stanislaw from Przywozki. Mayor equipment involved home square, garden and 7 villages (free of rent). In addition, it included pond situated near the city, with possibility of construction of mill. Large income was provided to Sokolow mayor by participating in benefits of inhabitants of the city for him. For his court-administrated work he received 1/3 of imposed penalties, 1/6 of trade tax and tallow stone from each gore. In addition, he had the right to brew beer for own use and for hunting small game and birds in the Lord’s properties with birds of prey and hunting dogs.