Home City The historical trail of Sokolow Palace in Przezdziatka 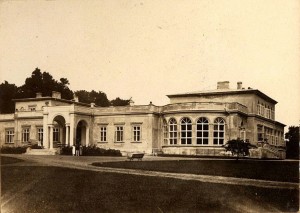 The oldest record of Przezdziatka come from the beginning of the 15th century, when Lithuanian Grand Duke Witold provided Sokołów together with the adjacent villages and farmlands to his secretary Mikolaj Sepienski, of Novina herb. In 1415, the village was included into the first church of St. Michael Archangel and St. Malgorzata in Sokolow. Przeździatka was one of three farmsteads, beside Kupientyna and Ząbkowa, forming Sokolow properties. Wooden, splendid mansion, the seat of goods in Przezdziatka, was erected by Ignacy Oginski. Probably then the new head office was surrounded with a decorative garden situated at ponds and tributaries sources of the Cetynia river. In the years 1788-1808, the owner of Przezdziatka was Michal Kleofas Oginski, diplomat and composer, who hosted king Stanislaw August returning from Grodzienski Sejm in 1793 in his Przezdziecki mansion. 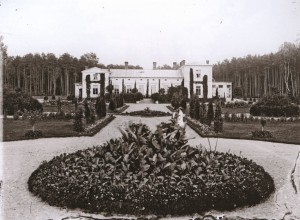 Later, Przezdziatka owned to the Kobylinscy family, who acquired the property in 1808, and sold in 1843 to Elzbieta Hischmann from the Lorenz family. Current palace in Przezdziatka was built on the initiative of the Hirschmann family, who in 1859 engaged known architect Henryk Marconi to design their new mansion. Further owners of the property and the palace was the Sobanscy family (since 1904) and the Malewiczow family (from 1924 to 1944). During World War II in 1944, after the Germans withdrew, the palace was taken by the Russians, who established military hospital there. After the war the property was divided and the State Agricultural Enterprise was established there. After 1946, the palace was renovated and designed for hospital, which operated by the end of 80s of the 20th century. At this time one of the most expanded reconstruction was carried out there. In the 90s of the 20th century abandoned palace was devastated. It was provided to church for charity in order to save it from total ruin and dismantling. On 9th February 2000 the John Paul II Mercy House of Caritas of Drohiczyn Diocese was established there.