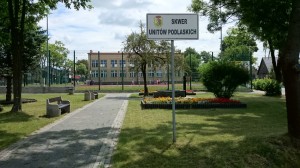 It is difficult to identify when Orthodox Church started to operate in Sokolow Podlaski. The historical division of the city into Russian and Latin parts shows that each community probably had its temple in the 15th century.

We know that Greek parish operated in the 16th century, when the wealthy Kiszkow family had owned welfares since 1508, (after Sepienski and Sokolowski). According to tradition passed on by the orthodox sources in the 16th century Orthodox monks from Brzescie and Drohiczyn served in Sokolow Orthodox church. As little was known about time and circumstances of approving Brzeska union by Sokolow Orthodox church. Apparently, the union was adopted in 1614 by then swieszczennik Jan Zalewski (who was previously a curate in Siemiatycze), and then in 1621 he again returned to Orthodoxy. Sokolow parish is mentioned as orthodox in the first half of the 17th century.  Orthodox Church operated in so-called Russian City, on the hill between current Dluga, Siedlecka and Repkowska streets and was called Holy Virgin Mary. In this part of the city, Russian pop owned manor as well. 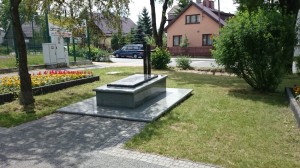 Since the Radziwill family times in the second half of the 17th century, Sokolow welfare was taken by the Krasinscy family. At that time the union was probably introduced. In 1716, Jan Bonawentura Kasinski, Plock Voivode, granted Sokolow benefice to Sokolow parochow, Father Jozef Ilkiewicz. It was at time of pastoral work of Jozef Ilkiewicz in Sokolow, the oldest Sokolow orthodox church visit came, made in 1726, when the owner of goods was Blazej Krasinski, Plock castellan, grandson of Jan Bonawentura (died in 1717), son of Stanislaw Bonifacy (died in 1717): Once orthodox church was wooden structure, but now it has rotten, but under the roof although holding, shingling. However, the Dome itself drops, yet with great, iron cross. Separately standing bell tower with gate and two new residences under roof finished with a cross of iron.  Orthodox church included ikonostas and many elements showing eastern tradition (ikonostas, tsar gate, etc.). A completely different situation was in 1757, when another visit was made. At this time orthodox church colorate and Sokolow owner was Tadeusz Lipski, Leczyca kasztelanic, later Leczyna kasztelan, general-lejtnant, comedy writer (died  in 1796) and church administrator father Samuel Filanowicz. During this time church facilities practically did not differ from catholic church (altars, no iconostasis, confessionals, choir).  Similar information about orthodox church and its equipment was drawn up in 1789, when the owner of the city and Sokolow goods was Michal Kleofas Oginski, at that time known as swordfish of GLK, known composer, and since 1764 parish priest Leon Zatkalik. This visit additionally mentioned about benches and pulpit.  The liturgy involved use of many beautifully bound books, gospel books, service books and other printed among others in Suprasl.

The Kobylinski family, subsequent owners of the city, constructed new wooden orthodox church facility, because the old one had burned down in city fire in 1809. The situation totally changed when in 1875 the tsar abolished union and parish and orthodox church were transformed into orthodox, which was not without the use of force and the tragedy of population.