The oldest historical sources show existence of two settlement structures in Sokolow, called Russian city and Lackie city.   This was associated with mixed ethnic settlement in these areas.  Lackie city was inhabited mainly by Poles – Catholics, it was organised around Catholic parish temple in the north from today’s market square and place by church was the market of the city.  Similarly, the centre of the Russian city was Orthodox Church with the square located in the south from the current square. 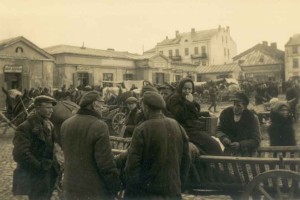 When in 1424 Sokolow was located on Sredzkie law, the square was situated in the centre, between Russian city and Lackie city; the market combined (united) two settlements.  Already in the 16th century, Jews started to appear in Sokolow, who were mainly around the market-tracking and south-west of it creating another settlement structure.  Here synagogue, prayer houses, baths were constructed, and cemetery was established – kirkut on the west side of the Cetynia River.  Later, when more Jewish people were coming, they occupied other areas of the city.   In the nineteenth century, newcomers of evangelical religion connected with plant in Przezdziatka came.  There evangelical school and cemetery, which does not exist today, functioned.